​Murat, Juri and Cornelia are among the so-called "working poor" - as click workers, in a cardboard factory and as freelance parcel deliverers, they are only linked by their low wages.
Each one fights on his or her own.

The jury statement German Short Film Award:
A parcel driver under constant pressure, two workers whose factory is closing down, a woman who is lonely in her home office: using three independently narrated strands as examples, Adrian Figueroa develops a miserable picture of today's working conditions in his thirty minute narrative. Thrown back on existential fear, everyone is tearing each other apart for the little, which in the end is too little to live on and too much to give up. The dynamics which is still hinted at in the imperative of the title PROLL! seems to have been definitively shattered by a system that turns each and everyone into a lone fighter and thus leaves leaves no strength for resistance. With its clever dramaturgy, the intense play of its magnificent cast, and a visual design that is perfectly attuned to the characters the film succeeds in creating a truly oppressive image of our present.

The jury statement Oberhausen:
A film about those down at the bottom. The low-paid, the stressed, the overlooked. The outstanding camera follows them closely, often intimately, we feel the pressure, see the sweat and the fear. And yet the characters remain at a distance from the observers, the film does not establish a sentimental commonality where there is no commonality. A film about the loneliness of our time.

The jury statement Achtung Berlin:
The film focuses on the system of work using the example of the parcel - from the folding of the cardboard boxes in the poorly running factory, to delivery, to the depressive reception in the eternal home office. No matter who the camera accompanies - there is always incessant ploughing, in all walks of life. (...) This is carefully researched, excellently acted, excitingly staged and immensely oppressive. We therefore give a special mention to Proll! by Adrian Figueroa.
GERMAN SHORT FILM AWARD 2021:
GERMAN CAMERA AWARD 2022:
The German Film and Media Rating (FBW) recommends  PROLL! as  "outstanding":
Festivals:
Press:
Frankfurter Allgemeine Zeitung, 13.05.2021:
"Proll!" is a film about the working poor of this country, a condensation of everyday circumstances that surround us, and of which we often take little notice."

Süddeutsche Zeitung, 10.05.2021:
"...does not establish sentimental commonality where there is no commonality. A film about the loneliness of our time".

Berliner Zeitung, 05.02.2021:
"They are people who are caught in a fatal chain of exploitation like flies in a spider's web, only they are prey and spider at the same time. Their speechlessness holds them by the gossamer thread. "Proll!" explains nothing, he shows and leaves infinite space. Its intense looks reach so far beyond the film."

Der Tagesspiegel, 08.02.2021:
"The film, which lasts just over thirty minutes, depicts a precariat that is currently booming, making the pandemic visible with burning glass sharpness."

Co-production with:
Supported by: 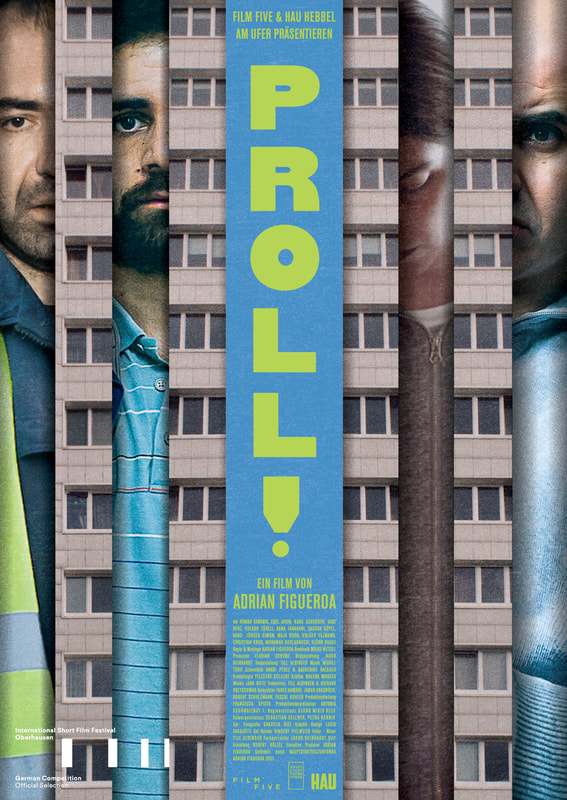